This week saw the first public meeting of the These Walls Must Fall campaign in Sheffield, hosted by Assist, Symaag and Right to Remain.

Over 100 people filled the hall, and heard from campaigners impacted by immigration detention and the hostile environment, before splitting into groups to discuss building the campaign in Sheffield.

There was certainly some anger in the room, over the recent treatment of long term Sheffield residents being harassed by the Home Office and snatched away to detention. But there was also a whole lot of hope, enthusiasm, and good old Yorkshire determination to get stuff done.

We heard from three visiting These Walls Must Fall campaigners from Manchester. The three women were not here to talk about their personal experiences of detention, but to give some facts about what it is, whats wrong with it, why they got involved in the campaign, and to tell the Sheffield folk what they have achieved in Manchester over the past year. This included protests, solidarity vigils, singing, art interventions, working with trade unions, students, schoolkids and faith communities, and getting Manchester City Council to pass a motion of support for the campaign.

The meeting also heard from a well known local man, recently released from detention along with other Sheffield Zimbabweans after a big campaign. Most people seeking asylum or other immigration status have to regularly report at their local Home Office reporting centre, and this is the most common place to be detained. It is an incredibly stressful experience, and especially so for Zimbabwean folk recently when they were confronted by officials of the country they have fled, a country still deep in political turmoil and violence.

Speakers from Symaag (South Yorkshire Migration and Asylum Action Group), Assist and Migrants Organise outlined the pressure that people without secure migration status are under, particularly with the ever present threat of detention without time limit. But they also spoke of the pressing need, and the opportunities for collective action.

We had a short break for food (thank you everyone who brought snacks to share!), and then got down to the business of assessing what skills and resources we had in the room, and ideas for action. And there were a LOT of ideas! We will be in touch everyone who attended soon about next steps.

If you want to get involved in the campaign in Sheffield, across Yorkshire, or anywhere else, please get in touch. Together we are stronger, together we can bring down these walls. 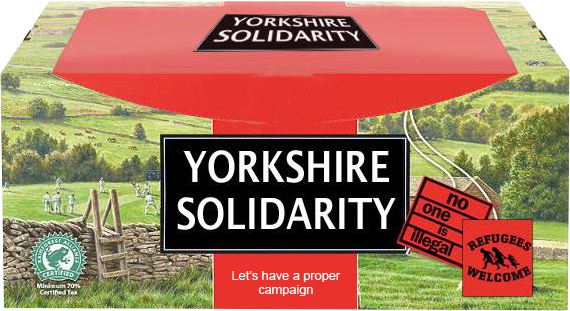