Right to Remain took These Walls Must Fall to Sheffield’s fabulous Migration Matters festival last week, as part of a two-part workshop, looking firstly at navigating the UK’s asylum system (based on the Right to Remain Toolkit) and then at an issue that affects all people seeking the right to remain in the UK: immigration detention.

Good to see so many new faces at this: Govt wants immigration detention to be hidden from those who don't experience it (but pay tax for it) https://t.co/bdZesyAq0E

We’d like to say a huge thanks to Migration Matters for inviting us, for Theatre Delicatessen for being such great hosts, and to everyone who came. But especial thanks must go to Sheffield Action for Trans Health, who amazingly live tweeted our These Walls Must Fall workshop on what immigration detention is, why it must be stopped, and how that can happen in Sheffield.

You can find out the facts about immigration detention on the These Walls Must Fall website, here.

Many kinds of migrants are detained, including children who are being required to prove they are not adults pic.twitter.com/SZrLDx4YdK

Find out more about the disappearing of homeless EU nationals via the campaign group Nelma, here.

Detention is indefinite – the lack of knowledge of when freedom will come is torturous pic.twitter.com/1bITQV7tAn

(These photos may give the impression that Michael here just held up signs, but he did a lot of speaking too! As did the workshops participants – there were great questions and contributions throughout).

People are held in detention centres across the country but also in prisons pic.twitter.com/NoqplRZaC9

How are people detained? Sometimes when they go for their regular reporting event at the Home Office (find out more about that here), but also just going about their every day lives, on the streets around us. 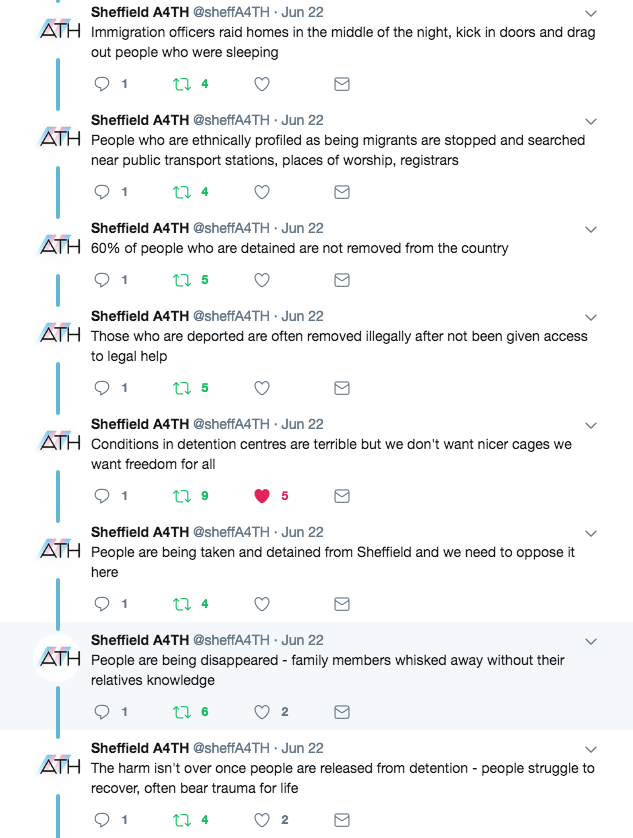 Immigration detention is an issue that affects us all … and you can be part of ending this outrage. These Walls Must Fall.