On 25th November 2021, we held our We Want Freedom webinar on supporting each other and resisiting the hostile environment. This was part of the Solidarity Knows No Borders week of action.

We heard stories and strategies from the front line of individual and collective resistance to immigration enforcement. We heard from people who are fighting back, with support from friends, family, communities, groups, organisations and solidarity networks, against the racist hostile environment. We learn from our experiences and we grow stronger together. We look ahead to the threats from the current Home Office and government, at what we can expect and how we can respond as a movement for justice. 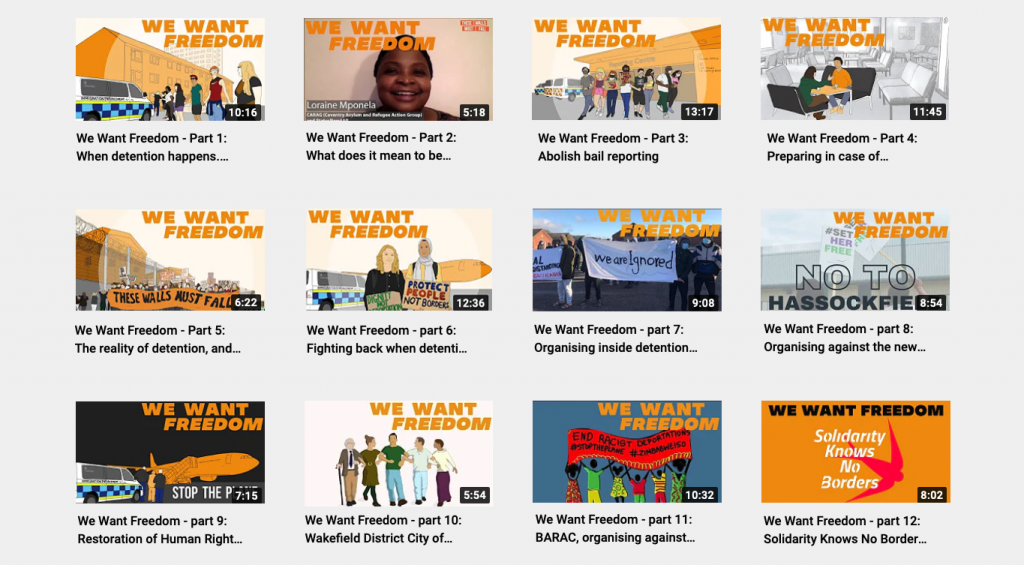 We hear from Bryan about what it’s like when Immigration comes for you, how it can feel like your world is falling apart. Later we hear from Bryan’s friends and supporters about the successful campaign for his release.

Part 2: What does it mean to be free?

A beautiful poem, What Does It Mean To Be Free, from Loraine Mponela of Coventry Asylum and Refugee Action Group (Carag), and Status Now For All.

Where is freedom?
For I can’t find it
but neither can my tormentor
for if I am not free
Neither are you.

Your job
of making sure that I am not free
makes you a prisoner too
to your desires of making me your prisoner
always.

A presentation by Nacky, a These Walls Must Fall campaigner in Liverpool. Nacky describes the immigration bail reporting system (also known as “signing”). It’s cruel, unnecessary and is basically just an expensive system of harassment. Nacky has been active in the Abolish Reporting campaign, and calls for solidarity to end this system.

Part 4: Preparing in case of detention

A presentation based on the Right to Remain Toolkit, with steps people can take to prepare in case detention happens, how we can look after each other when at rosk of detention, reduce the impact if it happens, and get out and home more quickly.

Part 5: The reality of detention, and why it must end

Mavis Harrison is a campaigner with These Walls Must Fall and Restoration of Human Rights Zimbabwe. Here she relates her first hand experience of being detained at the notorious Yarl’s Wood detention centre. Mavis is determined to end this injustice, so that no more women will suffer in detention.

Part 6: Fighting back when detention happens

Earlier this year, Moses was caught up in the government’s summer of mass deportation attempts. In this video we hear from Moses and his partner Daisy, about his experiences in detention, and the amazing community campaign that prevented many of the deportations, and won the release of Moses and others.

We have a quick overview of the development of immigration detention over recent years, to the point where we are now, where the lines between accommodation and detention are becoming blurred. We hear testimony from Amir, who organised from the inside of Napier Barracks, one of the new quasi-detention centres.

Part 8: Organising against the new detention centre for women

We hear from an inspiring campaigner against detention, Agnes Tanoh. Agnes is a leading voice in the campaign against the planned opening of Hassockfield (Derwentside) detention centre for women. Agnes speaks from experience, she knows what detention is, and she is determined that no other women should go through what she was forced to endure.

We hear from Panyika Karimanzira of Restoration of Human Rights Zimbabwe. Panyika gives an overview of ROHR, and describes how they rose in response to the UK government’s mass deportation attempts earlier this year.

Dick Davies of Wakefield District City of Sanctuary, on the ongoing need to support people seeking sanctuary, and the pressing urgency of staking a stand against the hostile environment, to end this cruel, racist system.

We hear from Zita Holbourne of BARAC (Black Activists Rising Against Cuts) on the struggles being fought on many fronts against Britain’s racist immigration system: through public education, legal representation, individual support, political campaigning, protest and direct action.

This is Part 12, the final section. Brian Dikoff of Migrants Organise talks us through the background of the Solidarity Knows No Borders network, and the recent national summit. From that summit, working groups have been set up to help build the movement and plan strategy and tactics for the coming year. At These Walls Must Fall we would encourage everyone to get involved in this network. A luta continua!

This site uses Akismet to reduce spam. Learn how your comment data is processed.